The author reached out to me with questions about Rosetta and requests for permission to replicate some photos and liner notes. She spent considerable time studying the files about Rosetta Records at Duke University that documented Rosetta's process and of course listening to the music.
​
Thank you, Daphne Brooks, for your efforts to celebrate and give credit to the important contribution made by my mother.

An excerpt:
"...Reitz’s greatest and heretofore unheralded legacy was in the realm of music criticism. As this chapter reveals, Reitz is one of our most formidable blues and jazz music critics, as well as a focused second-wave feminist critic, perhaps one of the only feminists of her generation to consistently and extensively champion the aesthetic work of Black women musicians as a vital and central component - the bedrock - of modern American culture. Her voluminous body of work, which includes dozens of meticulously crafted and heavily researched liner notes essays on women’s blues and jazz, not only make her worthy of recognition but also illuminate the myriad ways that Rosetta Reitz fundamentally revolutionized intellectual discourse on Black women’s musicality.

"No study of Black women and music should, in my opinion, overlook the groundbreaking critical methodologies and style of analysis that Reitz brought to her writing, since her work sought to change the playing field on which Black women musicians emerged as topics of interest and value among critics as well as fans. She cultivated a new critical language and new lens through which we might engage these artists and apprehend their often stunning, moving, and exhilarating artistic choices."
​
Click here for more excerpts.  Click here for more info about this book.
​
New Video
‘Sort of Like an Archaeologist’: Exploring the Archive of a Blues Music Feminist.
This video lecture by author Daphne Brooks discusses Rosetta's work in a thorough and loving way. Daphne delves deep into the Duke archives and brings forth Rosetta's thought process and manner in which she taught herself the language for best exploring and writing about the Blues Women.
Click here. Starts at 11:00.

In May 2020, we received a wonderful email from some thoughtful activists in Leiden, Netherlands.
They live in or near a street called ReitzStraat (Reitz Street) that was named for a leader in the Boer War, Francis W. Reitz.

They decided to change the dedication of the street for two reasons:
1) To rethink the role the Boers played as colonists and their link to the rise of apartheid.
2) There are not enough streets named after women.

So they searched for a woman named Reitz. Discovering Rosetta, they were impressed with her accomplishments (that they read about on this site) and just went ahead and made a new sign.  They will go through the official Council channels also. We just love that they took immediate grassroots action themselves.

Rosetta would have LOVED it!


Here is the original email:

Dear Miss Reitz,
I’m writing you to let you know that a few day ago ‘we’ changed the dedication of the Reitzstraat in our Dutch neighborhood from ‘Francis W. Reitz’ to your mother. ‘We’ are a small group of people (mostly woman) who live in the Reitzstraat or nearby. There are basically two reasons why we did this.

The first reason is that we take issue with the official dedication. Francis W. Reitz (1844-1934) is a leader of the ‘Boers’, a group of colonists of Dutch ancestry who lived (and still live) in South Africa. Up until the nineteen fifties they were considered to be ‘our brothers’ who should be supported, for instance in there wars against the English (Boer wars). This status led to there being a neighborhood in most towns in the Netherlands with the streets named after Boer leaders. From the fifties on more information spread about the role the Boers played as colonists and the way they are linked to rise of apartheid. Subsequently no new streets were name after them but also none were renamed. It is our opinion that the least we should do is educate people better about the background of the people our streets are named after; better then just a sign that says: ‘Francis W. Reitz 1844-1934, Boer-leader, president of Orange Free State’. To achieve that goal we are aiming to start a project together with the history department of the university in our town. The problem is off course is that this will take a considerable amount of time, maybe years, for instance because the council will have to sign off on it (they probably will, but such things take time).  The second reason why we wanted the change the dedication is that there are just not enough streets named after women.

We decided that it would be a good idea to start with just changing the dedication of the street name by putting a new description-sticker over the current one. So ‘all’ we had to do is find a suitable woman named Reitz. And that turned out to be not too difficult, because google quickly came with your mothers name. We are very impressed with the things you mother did. For me personally the book she wrote about menopause is very relevant because my girlfriend is in that life phase right now. One of the sings is on a house were four musicians live, they find the story about the record label especially interesting.

After we agreed on re-dedicating to you mother, we quickly decided on a text, ordered good quality stickers an put them on last Friday. So now we have a street name in our neighborhood name after Rosetta Reitz, we are very proud of that. Quite an improvement!

You can see the ‘before’ and ‘after’ on the photo’s I added to this message. The text reads: “Rosetta Reitz 1924-2008 author, historian, owner of Rosetta Records”. We hope you appreciate what we did. If you have any remarks or questions, we are glad tot answer them.

I hope you and your loved ones are well in these strange times.
We wish you all the best! 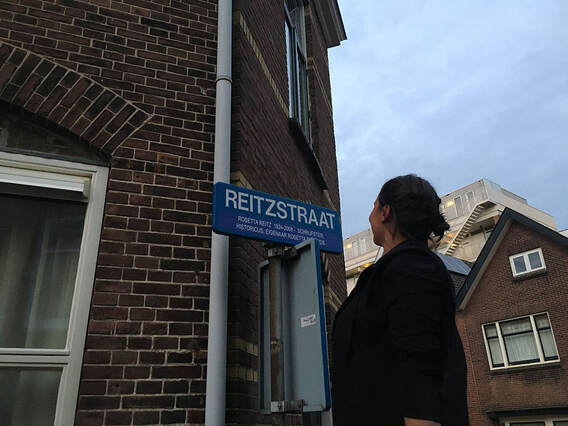 In August 2020, an article from the magazine, JazzIz, covered Rosetta's legacy and this wonderful story. Check it out by clicking on our 'Articles' page of this website.

The main Italian newspaper also picked up this amazing story:
​"A beautiful transition from male to female, from war to peace, from violence to culture." 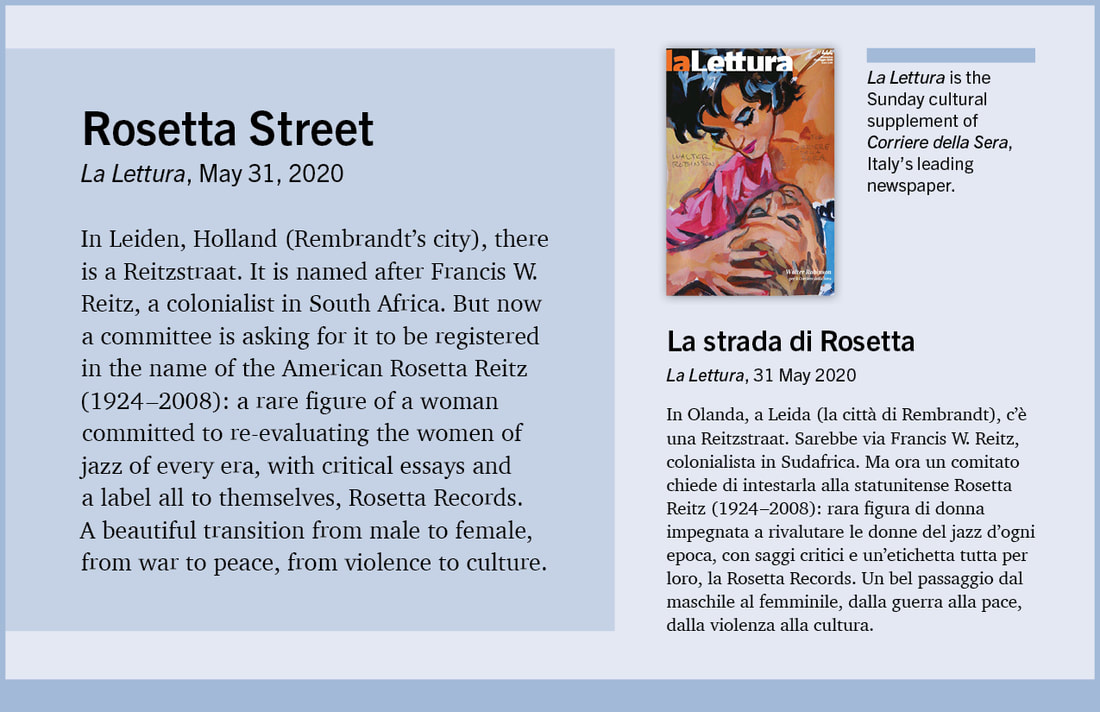